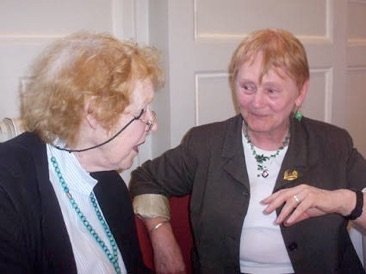 Ann talking to Barty Phillips at a FOBS reunion in 2006

AS A JOURNALIST Ann Barr had an extraordinary sense of timing. Though her great coups were based on flair, collegiality and observation, she had an impeccable sense of when a trend would become news. She spotted, sometime in the 1980s, that the British class system had become tribal, its oddest grouping a dim but definable lot which she and her co-author, Peter York, identified as “Sloane Rangers” in 1982. Two years later, with me, she targeted a new group, “Foodies”, who lived to eat and did so obsessively. Though the archetypal Sloane was the young Lady Diana Spencer, Barr knew the Sloane Rangers from the inside.

With her strawberry-tinged fair hair and unlined skin, Barr’s age was one of Fleet Street’s genuine mysteries. It was only in 2009, when she celebrated her 80th birthday, that many of her friends learned that she was not 20 years or so younger. She was of Scottish and Canadian stock, the eldest of three children of Andrew Greig Barr, whose father founded the family fortunes on Scotland’s other national drink, Barr’s Irn-Bru. Her mother, Margaret Gordon, was born in Vancouver but brought up in Montreal.

Born in London, probably in her parents’ Mayfair house, Barr (called “Pannie” by her family) was 10 when the war began; Margaret took the children to Montreal, where the two girls were schooled at The Study, a celebrated private girls’ school (motto: “The World Needs Great Women”). Barr was at this high-powered school for until 1945, and it exerted a strong influence over the rest of her life: she was notably well-educated, her memory stocked with apt quotations, which enabled her to pun with facility and to make vivid verbal leaps of imagination.

She was “finished” at a Victorian country house near Ludlow, to which Lancing College had been evacuated. Her father spent most of the War as a POW then worked in Germany with the Control Commission from 1945-48, and the children often had their holidays there; the family home was by now Elm Tree Farm near Hemel Hempstead.

Barr retained her Canadian friends, returning at least once a year and maintaining close contact with her mother’s close friend and relative, Meg Gordon, who left Barr and her siblings a generous legacy. Barr lived frugally in a modern one-bedroom, top-floor flat near Holland Park. She continued to work well into her 70s, giving friends the misleading impression that she needed to do so for financial reasons, though she was far too well brought up to speak about money. She was also loyal to her remarkable Norland nanny, Molly Baines, who had married a doctor from Whitby; Barr visited her at least once a year.

Though they knew she was clever and accomplished, Barr’s parents were of a generation that did not believe in sending girls to university, but somewhere along the line she acquired secretarial skills. Shorthand was an invaluable tool for journalism, and as her handwriting was illegible (at least to me), shorthand was key to her success. Her first job was in the back office at The Times Bookshop in Wigmore Street.

Her next move was to House & Garden, then edited by war hero and friend of Ian Fleming, Robert Harling, typographer and designer of the Sunday Times, in addition to writing a clutch of Fleet Street-inspired novels and thrillers. This apostle of clarity and simplicity was taken with the vivacious young woman and saw that her scrupulous eye and ear, allied to her quick wit and erudition, would make her an outstanding sub-editor. Among those whose copy she worked on was Elizabeth David, who became fond of her.

She had risen to assistant editor of H&G when Hugh Johnson (who was married to her cousin, Judy) was appointed editor of Queen by Jocelyn Stephens in 1968, and Johnson poached her to work with him. When Johnson left Queen to write his great book, The Atlas of Wine, he said, “I’m afraid I poached her again as my book editor at Mitchell Beazley.”

I believe she then returned to Queen with Johnson’s successor, the Berlin-born American Fred Grunfield, who wrote the definitive biography of Rodin, had been a roving journalist in Europe for Horizon and was rumoured to work for the CIA. In 1970 Michael Lewis, who owned Queen, merged the title with Harper’s Bazaar (to which it reverted in 2005), to form Harpers and Queen; Willie Landels became editor, with a later editor, Fiona Macpherson his deputy until 1975 and Barr as features editor.

The Italian-born Landels was a visual genius, employing photographers such as Norman Parkinson, Brian Duffy and Helmut Newton and making the lay-outs edgy. On the whole he left the words to Barr. She created the Barometer feature, the page every reader turned to first, to discover what she (and increasingly he) ought to be doing, seeing, reading, thinking or getting invited to. She developed a cadre of reader-contributors who would post their observations or tips about social life to Barr, who filed them in large manila envelopes, the contents of which she would spill out when she was ready to put together an article; and the rest of the office staff and regular writers were invited to add their comments as well.

Categorising the social tribes that were emerging from the chaos of the 1960s was one of the chief chores of the manila envelopes, and the Sloane Rangers were easily identified; but then the young nursery teacher who was to marry the heir to the throne went to many of the same parties as the young people who worked at H&Q. The chief difference was that she was the daughter of an earl and that they were mostly very clever – though so badly paid that one of their perks was writing the “Evelyn Grubb” restaurant column.

Another of Barr’s features was “Private Cook”, a recipe feature written, typically, by an H&Q reader who was a good cook. At the suggestion of two friends in common Barr asked me to contribute to it in 1977. She was a bit astonished to receive the copy on time and to length, and asked me to become a regular contributor. For the Christmas issues I wrote reviews of cookery books that got ever longer, the final one being about 10,000 words, revolutionising publishing practice, as cookery books had seldom been reviewed before. She indulged me at the same length for an incongruously scholarly piece on the whereabouts of Virginia Woolf’s manuscripts.

We knew The Official Foodie Handbook would be a best-seller like The Official Sloane Ranger Handbook for the same reason – it was not only a gentle satire on the tribe it characterised but also a rulebook for those who aspired to join the tribe.

In 1984 Barr began nipping out to call boxes to negotiate with me, on behalf of Trevor Grove and Donald Trelford, to become editor of The Observer’s women’s pages. She presided over the last of the paper’s glory days, with scoops ranging from a youthful Toby Young’s revelation about the sartorial preferences of football hooligans to the revelation that Auguste Escoffier and César Ritz were crooks. In the early 1990s, just before Trelford was arranging the redundancies that allowed the paper’s sale to The Guardian, Barr was one of the few members of the chapel brave enough to vote openly on a controversial matter (rather than abstain), and she was sacked.

She had had many beaux, and had come close to marrying one of them in her 20s. But she wasn’t cut out for a conventional Sloaney life. The love of her life was Alan Riddell (1927-1977), the Australian-born, Scottish-educated concrete poet. One day she brought to the Observer office a large birdcage containing a green Amazonparrot called “Turkey”, whose gender had to be rethought after she laid an egg. When Ann realised she was succumbing to the Alzheimer’s that had claimed her father the first thing she did was to make provision for Turkey, whom she thought was bound to outlive her, though the bird continued to delight Barr long after she had ceased to recognise visitors to the nursing home that looked after her with care and devotion.