David Astor’s son, Richard, in conversation with John at a FOBs party in 2004

JOHN THOMPSON was born in 1928 in Bangor, Co Down, in Northern Ireland, where his father, also John, was a tax inspector. When he was promoted, he took his wife, Lilian, and their son to London. John was educated at St Paul’s School, where he was head boy. During the war the school was evacuated to Wellington College in Crowthorne, Berkshire. The boys’ accommodation was some way from the school and they formed up like an air squadron on their bicycles for the daily ride to classes.

Asthma prevented Thompson from serving in the forces. Instead he went to Pembroke College, Oxford to study history. Most of his contemporaries were demobilised officers starting or resuming their degrees. 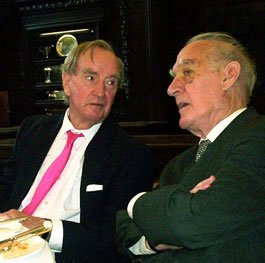 John and Anthony at the same FOBS party

He later worked in advertising, but was temperamentally unsuited to it. He began to feel envious of friends, such as his flatmate Anthony Sampson — the future author of the bestseller Anatomy of Britain — who were prospering in journalism. One day he encountered another old friend, George Scott, who was editing the political and literary weekly Truth. Scott invited Thompson to join the staff, such as it was. In fact the only other person who worked there was a young writer called Bernard Levin, who would later became godfather to one of Thompson’s sons.

Lord Beaverbrook headhunted Thompson to be one of his “bright young men” at the Daily Express. Here Thompson was a diligent drama critic, known to roam as far as Plymouth for first night performances when there were none to be found in London.

One young woman whom he kept meeting, in what she called their “contiguous circles”, was Sylvia Waterhouse, a BBC producer known to everyone as “Sally”. They had been dating for several months when he was posted to New York by the Daily Express. Thompson asked her to go with him and proposed. They married in 1957, one day before departing for America. Their early married life was danced to the tune of jazz in Greenwich Village; among their friends was the composer Bill Russo, who introduced them to Louis Armstrong and Lionel Hampton. The poet Ogden Nash cooked the couple steak and kidney pie to make them feel at home.

The couple had three children: Piers, who is a DJ; Barnaby, a film producer and director; and Eliza, a music consultant and opera producer who is married to Valentine Low, the Times royal correspondent. They all survive him.

In 1962 Thompson joined The Observer as news editor. One of his most reliable sources of stories in the Middle East was the stringer Kim Philby. Thompson was rather disconcerted when his correspondent disappeared. Indeed, he was one of the last people to speak to the British double agent before his defection to the Soviet Union.

As the editor of The Observer’s colour magazine from 1966, Thompson’s greatest coup was to recruit a young cookery writer called Jane Grigson on the strength of a recommendation from Elizabeth David, his first choice. He visited Grigson at her house in Wiltshire. She served him a dish of spinach that had been soaked in butter for a week. He hired her before pudding.

He was an unlikely actor, appearing in Dorian Gray and St Trinian’s

The paper’s charismatic editor, David Astor, was sometimes bemused by Thompson’s diffidence, which he found out of kilter with so many journalists on Fleet Street. The only barometer of Thompson’s patience, or loss of it, was his habit of pre-empting the natural conclusion of a phone call with, “Right, OK, goodbye” before returning the receiver with fractionally more alacrity than usual. These words became code for more abusive phraseology in the Observer office of the Sixties.

After spending 15 years in broadcasting, Thompson enjoyed a busy retirement. He edited a magazine for ITV, The Viewer, instilling the rigorous tradecraft that he had learnt in Fleet Street and amused colleagues by sending faxes in the same manner as a telegram. One read, “DEAR FRANK. STOP. NEED 1,500 WDS BY THURSDAY. STOP. THANKS, JOHN.”

In recent years, he become the unlikeliest of actors. Through his film producer son Barnaby, Thompson made cameo appearances as the Commons Speaker in Dorian Gray, and as a civil servant at the Department of Education in the remake of St Trinian’s. In each of these roles, he simply played himself.

In the village of Great Bedwyn, near Marlborough in Wiltshire, he and his wife bought the two cottages adjoining theirs and incorporated the vegetable patches on either side into a large garden. Thompson was also active in local affairs, sitting on the parish council with all the sagacity of his Whitehall days.

Many old media friends descended on Marlborough for his annual cricket match, the teams captained by his sons. Thompson took a patriarchal role as umpire, but gained a reputation for giving appalling lbw decisions. Batsmen would curse as they walked back to the pavilion after being given out by Thompson, but, like so many people who had crossed his path, they could never be angry with him for long.