The NUJ: Memoirs of a life member 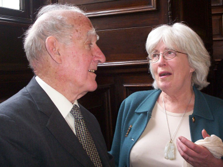 LOOKING BACK as a life member, I can truthfully say that joining the NUJ changed my life. Aged 19 in 1953, my first taste of Fleet Street was The Times typing pool, where I was enrolled into the clerical union NATSOPA. Our ‘chaperone’ sent us round the grand old Queen Victoria Street building to be dictated to. The people were interesting and things happened: I remember watching the first ever long-distance pictures arriving in the Foreign News Room when the Times TransAntarctic Expedition reached the South Pole.

I was transferred to The Times Educational Supplement, which had one or two journalists and a kindergarten of brainy Oxbridge graduates – managed by John Knight, the kindly News Editor. He organised a 21st birthday party for me, encouraged me to do small editorial jobs and allowed  me to write NIBs. The young men wrote poems, took me out and greatly broadened my intellectual horizons. In the days of ‘Look Back In Anger’ I went to first nights with critics who had to rush out and dictate copy for late editions.

However, I was a secretary and in 1957 I started temping at The Observer, in Tudor Street.
I worked for the Literary, Features and Fashion editors, who all shared a small floor with Pendennis, the gossip column, then run by Anthony Sampson for whom in due course I became an editorial assistant – probably the first The Observer ever had.

I was still in NATSOPA, on quite lowly pay. After a while I got itchy feet and managed to get a visa to work in the USA; when I gave notice I was asked why. I explained the union situation and the News Editor, Michael Davie, arranged my transfer to the NUJ. This doubled my salary, and I spent altogether seven years on The Observer. (With no degree, of course, although I did get one, aged 50, from the OU.)

As I approached thirty I decided to go to Africa, about which The Observer had taught me a little. I went out to Addis Ababa and spent eighteen months writing ‘Welcome to Ethiopia’ an official handbook for Emperor Haile Selassie’s Ministry of Information. What an adventure that was! Then I travelled and worked with a Turkish artist while he was painting portraits of African Heads of State, including Jomo Kenyatta of Kenya, Kenneth Kaunda of Zambia, the Emperor and the elderly King Idris of Libya, just before Gaddafi ousted him

In 1969 I returned to Fleet Street, where I helped to initiate, and ran, Observer Art – an original print publishing scheme which appeared in the Colour Magazine. A few years later I set up Goodwill Art, my own educational publishing company which is still going strong. I also worked on Africa Analysis – a fortnightly political and financial newsletter started in 1986 by my late husband, Richard Hall, which I had to take over in 1997. It’s office was in Ludgate House.

My journalistic career may seem erratic, but two things have remained constant – the direct debit payment of union dues and my Press Card. Long live the NUJ!