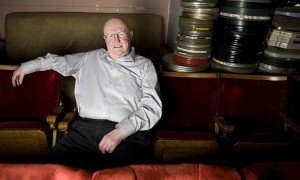 Many years ago, Alexander Walker of the Evening Standard bet his fellow critics that they couldn’t guess the number of allusions to other art forms in Philip French’s next film column for the Observer. The nearest guess would get a prize. No one came close and the prize was withheld. The answer was 17.

There was no malicious intent in the abortive competition. Rather, there was a joshing admiration for a film critic who had a far wider view of the arts than simply film. French, who has died aged 82 following a heart attack, was a critic who not only wrote well but knew his stuff more than most and could relate a film to the time in which it was made, precisely.

He had an encyclopedic knowledge of the cinema that stunned some of his colleagues, and a memory to match. Many was the time one of us asked him a question about a film, or an actor, and only on a very few occasions did he not have the answer off pat. He was, in fact, the exact reverse of the kind of film reviewer often imposed on the arts pages these days who writes for effect and eschews much expertise as boring. In that respect he was a thoroughly old-fashioned critic who laid out his knowledge with painstaking eloquence.

Much of his knowledge of the arts was amassed during his time as producer of The Critics, on BBC radio. Those selected for the panel were expected to see a film, go to the theatre, read a book and visit an art exhibition. French, of course, went along too. The programme, the predecessor of Critics’ Forum and now Saturday Review, was transmitted with only a bit of editing after we had all eaten lunch at Portland Place. It was not an especially good meal but there was enough wine to loosen our tongues in time for the broadcast. One of us was the chairman, but sometimes French himself would lead the discussions, without a hint of the stutter he had for the rest of the time. He could not explain why this was the case. But it was, and he ruled us with a rod of iron, though never without sympathy for any person who could not quite manage to say something coherent about one or other of the subjects on hand.

As a film critic, he perhaps loved westerns better than any other genre, sometimes dividing them into Democratic or Republican films: Shane (1953) was Democratic, Red River (1948) was Republican. He liked both sorts, though, and it was a strange week when French faced down a western on which he had nothing good to say.

Otherwise his interests were as wide as any of the best critics of his era, and often wider. No reader could possibly have felt that they had not been taught something by his reviews, and usually entertained, too. Though he was essentially a kindly man, his views on some fellow critics could be amusingly sharp and generally spot-on. But he was still charitable to those who hated a film he liked, or liked one he didn’t. “Really?” he would say. “I should see it again if I were you.” That was the nearest he got to a reproof.

His reproofs to bad films, however, were legion: of Man of Steel (2013), for instance, he wrote: “The film is a load of repetitive tosh, featuring in every sequence of its 143 minutes more special effects than God used when he created the world, ending with a list of credits longer than many a telephone directory”.

Of Harmony Korine’s Spring Breakers (2012): “Korine would feel he’d failed badly were I to have enjoyed it.” But his favourable reviews were also full of an incisive bite. Of Orson Welles’s Touch of Evil (1958), he wrote: “A baroque masterpiece – dark, complex, perverse, riveting …. The film grabs you by both lapels.” He reckoned at the end of his career that he must have seen well over 14,000 films and reviewed most of them. If very few gave him deep pleasure, he was one of those critics who could find something to like in any that “tried to entertain intelligently”.

Philip was born in Liverpool, the son of an insurance salesman, John, and his wife, Bessie. He was educated at the direct grant Bristol grammar school and after national service as a second lieutenant in the Parachute Regiment (1952-54) studied law at Exeter College, Oxford. While there, he edited the student magazine the Isis in 1956, and won a scholarship to study journalism at Indiana University Bloomington. Returning to Britain, he became a reporter on the Bristol Evening Post (1958-59) before joining the BBC’s North America Service as a producer, and continuing as a talks producer for the domestic service (1961-67), and then a senior producer (1968-90). He wrote for the New Statesman and the Times on film and theatre, eventually becoming film critic of the Observer in 1978; his first piece for the paper had appeared in 1963.

Among his books were The Movie Moguls: An Informal History of the Hollywood Tycoons (1969) and Westerns: Aspects of a Movie Genre (1973), which was later revised and reprinted. He also wrote Cult Movies (1999), with Karl French, one of his three sons, and I Found It at the Movies: Reflections of a Cinephile (2011). French’s last years brought well-merited honours. He was made an honorary member of the British Academy of Film and Television Arts (2008), British Press Awards critic of the year (2009) and was appointed OBE in 2013. When his 80th birthday arrived he retired as chief critic, though continued to write for the Observer.

He is survived by his Swedish-born wife, Kersti (nee Molin), whom he married in 1957, and his three sons, Karl, Sean and Patrick.