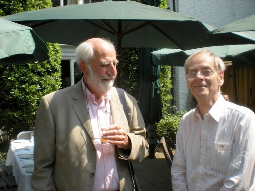 Twenty-two Fobs members and ten other Mark Frankland friends gathered at the Chelsea Arts Club on the last Monday in May to celebrate Mark’s life over a lunch. It was a glorious early summer day, and Sue Arnold, the sponsoring member of the CAC, had organised jugs of Pimm’s (paid for with the very last of Fobs’s now exhausted funds). Sadly no members of Mark’s family were able to come: his cousin, Diana Di Marco, who lives near Perugia, had succumbed to bronchitis/pneumonia and had been warned by her doctor that a flight on Ryanair might kill her.

Donald Trelford flew from his home in Mallorca, and returned after the lunch, only the second time he had made the round trip in a day – the first was to attend Gritta’s 80th party.

He spoke first, telling how he had persuaded a Soviet official to restore Mark’s Moscow visa in the early ’80s. The fellow had been huffing and puffing about how disgraceful (in Soviet eyes, that is) Nora Beloff’s reporting from eastern Europe had always been. Donald told the man that he, Donald, had been responsible for firing Nora, and was instantly embraced in a bear hug: no further problems with the visa! Neal Ascherson talked next, saying that he could see Mark’s face and hear his voice even as he rose to his feet. Mark’s spirit hovered over the afternoon.

As an undergraduate Mark had been involved in a remarkable escapade, springing a Polish student from behind the Iron Curtain: David Hindmarsh, one of the survivors among the gang of students, told the remarkable tale. Mark’s Russian (learned in the Royal Navy), his coolness and his presence of mind bamboozled the border guards.

There was a ‘Quaker’ session, during which those moved to speak rose to their feet, which produced half a dozen reminiscences (several very funny) of a much admired and sorely missed colleague. As Carol Cattley said: ‘Mark was a great Fobs loyalist’. He attended all Fobs meetings, and we, like Neal, certainly felt he was with us that day.

About the Author: FOBS