“For you the war is over” is the title of Ian Mather’s phenomenally successful book about his time being banged up as a spy by the Argies during the Falklands War.

This is his account of how he survived torture and starvation in Ushuaia Prison, Tierra Del Fuego – the most southerly prison in the world!

In 1982 Ian Mather, who was the Defence Correspondent of The Observer, was arrested and charged with espionage, and locked up. It reveals how journalists are put in peril when governments blur the borderline between legitimate reporting and the murky world of espionage.

To purchase your copy of Ian’s fascinating story, and the moment when Margaret, his wife, who  hadrung the prison, was simply told “Libertad”, email ianjmather@yahoo.co.uk

Des Wilson (columnist 1970-74) has had his memoirs published by Quartet. Entitled “Memoirs of a minor public figure” they include three chapters on his experiences at the Observer. 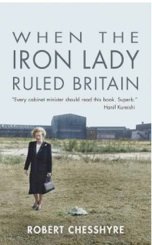 The book by Robert Chesshyre, first published as ‘The Return of a Native Reporter’ and extensively serialised in The Observer, is republished this month (June 2012) under the title ‘When the Iron Lady Ruled Britain’.

The book attracted much attention with extensive (and complimentary) reviews on both sides of the Atlantic. Among those who praised it were Christopher Hitchens, William Boyd, Beryl Bainbridge and Hanif Kureishi, who said it was a ‘must’ read for all members of the cabinet. It is being republished by Alma Books (and as an eBook).

Mrs T is clearly not going to be with us much longer, and there will shortly be a splurge of re-assessments. The strength of ‘Iron Lady’ is that it is contemporary reporting, what it was really like in Thatcher’s Britain, written from the various front lines of British life when the Iron Lady ruled the roost. Bob has written a 4,000-word new Foreward, which draws the comparisons between the Thatcher era and today.

What is extraordinary is that, almost everything written then about Britain could be written today. ‘Big Bang’ had just happened and there was concern about City bonuses and the distortion to income differentials caused by gross salaries; the rich were getting richer in a hurry, and the poor poorer; unemployment stood at three million, as it does today; we were squandering the North Sea oil revenue –  ‘pissing it against the wall’ as Aberdonian bumper stickers had it; there was widespread concern about state education; manufacturing was collapsing; the fast widening north/south divide, accelerated by a crazy house market, was causing frustration and bitterness north of the Trent; many inner cities had become ‘no go’ areas; and some post-war new towns had already failed.

Then (as now) Thatcher split the country: I met people (mainly in the north) who would have happily seen her dead, and others (mainly in the south) who saw her as a latter-day saint. The strength of this book (and why it is being republished) is that it is authentic reporting, rather than reassessment, from the time when Mrs T was in her pomp.

‘Iron Lady’ is available from bookshops, from Alma the publishers, and via Amazon.