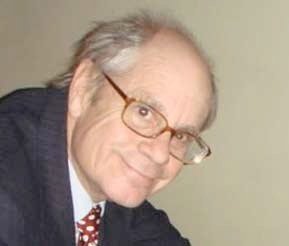 Simon Hoggart was an original. As I type “they don’t make many like him” I can hear some politicians muttering “Thank goodness”. But rather more inhabitants of the Westminster village, including victims of his anarchic and acerbic wit, will join countless readers in mourning the Guardian‘s polymath sketchwriter, who died on Sunday after a stoical 43–month struggle against his incurable pancreatic cancer.

It was only in December that complications arising from the disease in combination with another round of chemotherapy forced Hoggart to give up writing the Guardian’s parliamentary sketch – which he had done for 20 years – as well as his popular Saturday column. His final article, a review of the year just ending, appeared on 19 December. It was a waspish summary in which he noted that, while Pope Francis “may have renounced his own infallibility,” Margaret Thatcher never did.

When I first worked with him in the Commons press gallery during the turbulent 1970s, glued to his battered Imperial typewriter was a handwritten memo to himself. It read something like: “Always remember, you are not writing for your contacts, for MPs or civil servants, but for a clergyman in Norfolk, a busy housewife in Penge and – with luck – two or three other people.”

Not that it was ever just “two or three” readers. After joining the Guardian straight from university in 1968, Hoggart quickly found a distinctive voice, serious but idiosyncratic, often disrespectful, always witty. He reported from the dangerous streets of Northern Ireland during the height of the Troubles, then moved to Westminster as a political correspondent, briefly the paper’s sketchwriter after Norman Shrapnel’s retirement.

After 12 years on the Observer, then not owned by the Guardian, including a stint in Washington, he would later return to the sketch in 1993. By then a regular on radio and TV, Hoggart chaired Radio 4’s The News Quiz for 10 years before 2006. He also wrote about politics for Punch, and wine and TV for the Spectator. It helped that he wrote fast, often while talking and (he had a low boredom threshold) doing a crossword. He published 20 books and anthologies.

Though a resourceful news reporter and feature writer on five continents, one with an eye for telling detail, shrewd judgments (Alan Clark was “a philanderer obsessed with his own wife”) and a vivid turn of phrase, he found his most comfortable niche as a humorous columnist.

It was what the readers wanted.Twenty years after his return to the sketch, David Cameron, the 10th prime minister he had known, joined the last Monday night’s tributes after his death at the age of 67. “Simon was an acute and witty recorder of British politics and one of the pioneers of the art of sketchwriting, as well as a prolific author and broadcaster. Above all, he was also an extraordinarily nice man.”

Yet in what would be his final sketch, on George Osborne’s autumn statement, he likened the chancellor to Mr Micawber (“In America the president’s aides are scratching their heads and wondering how they can create their own British miracle”) and wrote of Cameron that “he smiled like the Cheshire Cat after a large sherry”. Of Ed Balls’s response Hoggart declared: “If he had pretended to be any angrier he would have been coughing up his own intestines.”

On Monday Ed Miliband, himself much-mocked, called his tormentor “a brilliant and funny writer,” and was echoed by Tony Blair, who spoke of “an outstanding commentator and writer with extraordinary wit, humour and insight”.

But Hoggart, whose family background and childhood were rooted in the industrial north of England, was not a fan of New Labour. His dislike of New Labour (“if they ever invent a fat-free lard it would resemble a New Labour MP”) made him treat Blair cynically, as a self-satisfied opportunist. “I sat in the front row for Tony Blair’s [conference] speech. It was like the monsoon in a Somerset Maugham short story,” he once wrote.

At Westminster, as in Northern Ireland, Simon did not take sides, he mocked the follies of them all. But his instinct – Lancashire-born, raised in Hull and Leicester, the son of the literary and cultural academic Richard Hoggart – was on the side of the underdog. He knew Margaret Thatcher had made some necessary reforms, but felt she was neither evil witch nor national saviour, merely increasingly mad and out of touch.

John Major’s curious vocabulary and sentence structure he routinely ascribed to the then-PM having learned English as a second language in a British Council office in rural Nigeria.He had his favourites: Tory Michael Fabricant (Mickey Fab) with his “My Little Pony” blond wig; the large and booming Tory grandee Nicholas Soames, whom he saw as a bouncy castle; Sir Peter Tapsell, whose grandiloquent pronouncements he imagined were being taken down on vellum by monks with quill pens. But as a stickler for correct grammar and usage, Hoggart was less forgiving towards John Prescott.

His daily pyrotechnics during the parliamentary term and conference season – plus Saturday’s diary of his week’s doings – became all the more remarkable in mid-2010. Initially misdiagnosed, he was found to have a cancer on the pancreas which surgery could not remove.

From then on, life became a struggle for survival. Hoggart was determined to keep working and to maintain his social life despite debilitating bouts of chemotherapy. He kept quiet about his illness and few outside his family – Alyson and the couple’s two children, Amy and Richard – knew why he would take an odd day off.

In December, his condition worsened steadily. Though he got home to his family in west London late on Christmas Day, Hoggart soon returned to the Royal Marsden hospital. Until the last few days visitors had found him sounding off, as usual, against favourite targets, the folly of politicians, publishers and privatised train companies, the pleasures of food and drink, the stupidity of manufacturers’ safety warnings. He remained determined not to give up, nor to let his illness become widely known lest it detract from the laughter he always sought to generate. Alan Rusbridger, the Guardian’s editor in chief, said: “Simon was a terrific reporter and columnist – and a great parliamentary sketchwriter. He wrote with mischief and a sometimes acid eye about the theatre of politics. But he wrote from a position of sophisticated knowledge and respect for parliament. A daily reading of his sketch told you things about the workings of Westminster which no news story could ever convey. He will be much missed by readers and his colleagues.”