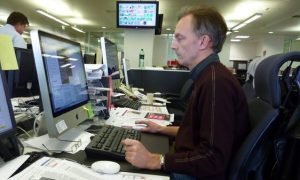 Dave Pearson, Observer production editor, at work on an edition of the paper. Photograph: Kathryn Whitfield for the Observer

Dave, as he was universally known, retired as production editor last September. He had held the role since 2009, designing pages, leading a team of subeditors, ensuring each page of the newspaper was the best it could be and that the paper went to press on time. When big stories broke close to deadline, he would be the cool, calm centre of the newsroom.
A consummate newspaperman, Dave’s Observer career began in 1983 on the business pages, where he rose to be chief subeditor. He moved to news in the 1990s and, like all other production journalists, embraced continuous technological change. He mastered each advance with his customary ease and was infinitely patient in passing on that knowledge to others.
Famed for his dry sense of humour, his wry and inventive speeches were a highlight of many staff events. Paying tribute, editor John Mulholland said: “Throughout his professional life, Dave showed incredible loyalty to the Observer, and his kindness and consideration for his colleagues will always be remembered.”

David leaves his wife Yvonne and their sons Richard and Tom and daughter Siân.