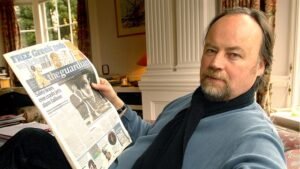 Eamonn McCabe, one of the most celebrated and admired newspaper photographers and picture editors of his generation, has died aged 74.

McCabe was a multi-award-winning sports photographer at the Observer from 1976 and later became a trailblazing picture editor of the Guardian at a key moment in its history. His third act was as a portrait photographer, with 29 examples of his work in the collection of the National Portrait Gallery.

McCabe’s death at his home in Suffolk on Sunday was sudden and unexpected. His wife, Rebecca Smithers, a former Guardian journalist, said McCabe was a kind, modest and encouraging character.

“He was very generous to younger photographers coming up through the system,” she said. “He was very encouraging. He would give big lectures but also talk to tiny little camera clubs in village halls. If people wanted to hear about his work he was happy to do that.”

The war photographer Don McCullin described McCabe as a lovely and straightforward man. “He was very passionate about photography and whenever you dealt with him he was always honest and a very nice human being. Like most of us, his life was photography.”

“Photography has lost its way a bit, the way colour and digital and all those things have come into fashion. A lot of people like me and him probably thought our number was up.”

McCabe photographed McCullin for portraits on two occasions. He said: “He was just such a nice guy, he was always so enthusiastic.”

Katharine Viner, the editor-in-chief of the Guardian, said: “Eamonn was a wonderful photographer and highly skilled picture editor, who helped make the Guardian and Observer into visual powerhouses. “He was also a lovely man – as a young Guardian writer I was always thrilled if he was assigned to the same story as me. He will be greatly missed.”

“It is very rare for somebody who does action sports to master the art of portrait photography. I think he is unique in that respect. He spanned three fields and excelled at all of them.”

He photographed the titanic Borg v McEnroe tennis matches, took a memorable picture of Brendan Foster running in the rain on his way to setting a personal best in the the 10,000 metresin 1978, and was there for the Boat Race the same year in which the Cambridge boat sank.

“My first Boat Race, they sink, I get the blame for it … but it made a lovely picture,” he said in one interview.
One of his most memorable pictures was of the Chinese table tennis player Li Zhenshi and his staggeringly high serve.
In 1985, he was named news photographer of the year for his images from the Heysel stadium disaster.

After a spell as picture editor of Robert Maxwell’s short-lived SportsWeek, McCabe was hired as the Guardian’s picture editor by the paper’s editor, Peter Preston. It was a time when the new Independent newspaper was much more daringly showing the power of news photography and the Guardian, which had some great photographers, was falling behind, still using pictures in a traditional, often cliched way.

His third act was as a portrait photographer, including memorable series of writers in the rooms where they wrote and artists in their studios.

Fiona Shields, the Guardian’s head of photography, described McCabe as “the godfather of photojournalism”.
“He really set a standard and left a legacy that we all follow and are really proud to follow. He was also an incredibly kind person with amazing good humour. He was always full of anecdotes and warmth.”

Roger Tooth, who succeeded McCabe as Guardian picture editor, joked that both of them agreed that taking pictures and running the picture desk was “so much better than working”.

He said: “Eamonn was a brilliant photographer and picture editor with a natural talent for capturing or identifying the unusual or unseen. With his natural warmth he was always an encouraging presence wherever he was.”

McCabe was also a frequent speaker about photography, wrote several books and was involved in a number of television series, including Britain in Focus for BBC Four.

He is survived by Smithers and their daughter, Mabel, and his son, Ben, by a previous marriage.
McCullin said McCabe was like all great photographers – he never stopped working. His wife agreed. “Only two weeks ago he was photographing Aldeburgh rugby club. No job was too big or small.”

From the East Anglian Daily Times

He lived in Saxmundham, and in 2011 became a senior visiting fellow at the University of Suffolk. He held this post until 2020.

At the University of Suffolk he taught and lectured. His colleagues remembered him for his anecdotes and his generosity to students and others. 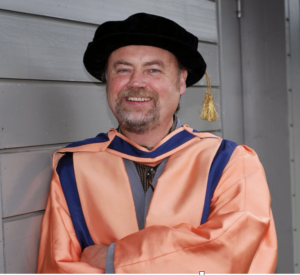 Photographer Eamonn McCabe in his robes before receiving an honorary degree from the University of East Anglia. Photograph by Archant

Geoff Buono, photography course leader at the University of Suffolk, said: “One of the first times we met he came to do a presentation and he had a slide carousel of pictures he’s taken. On it he had pictures of Nick Cave, Al Pacino, he had sports photography – he had everything. And he did it all so well.

“He had a massive impact in how sports photography was made – with beautiful pictures, not just action shots – and then he redefined himself as a brilliant portrait photographer as well.

“But he was so humble, you almost had to tease this all out of him.