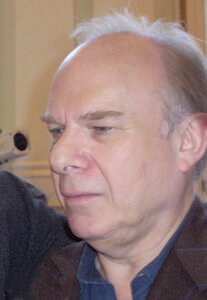 Those of you who were on The Observer in the 1960s may remember John Heilpern, who was on the paper for a number of years. He has sadly died, having been ill with lung cancer. Below is an obit from the NYT, written by his wife, Sydney Weinberg.

John Heilpern died of lung cancer in New York City January 7, 2021. Born in Manchester, England on April 3rd, 1942 to Maurice Samuel Heilpern and Rachel Berkovitch Heilpern, John was a proud Mancunian (Manchester City, in particular), read Law at Oxford and was trained by Fleet Street in London in the 1960’s and 70’s. As a young star reporter for The London Observer in 1966, under the mentorship of David Astor, John made his mark interviewing all the greats of stage, screen, arts and letters, including to name but a few, John Gielgud, Graham Greene, Noel Coward, Helen Mirren, Vanessa Redgrave and The Who. He also worked as assistant director for Peter Hall at The National Theatre in London in 1976. John continued this journalistic tradition when he moved to New York in the 1980’s where he filed a weekly column for The Times of London under Harry Evans; a weekly theater column at the New York Observer under editor Peter Kaplan; and the “Out to Lunch” column at Vanity Fair under Graydon Carter. As an author, he documented theater director Peter Brook’s legendary trek through Africa in “Conference of the Birds,” and wrote the authorized biography of British playwright John Osborne (“John Osborne: The Many Lives of an Angry Young Man”). He also published a collection of essays and collected pieces in “How Good is David Mamet, Anyway?” He is survived by his wife Sydney Houghton Weinberg; daughter Dr. Rachel Eliza Heilpern of California (Christopher Crook) and granddaughter Keira Mae Crook of California; and brother Dr. Jeffrey Heilpern of California. For fifty years as an author, critic and journalist, John’s incisive intelligence and sharp wit were laced with a healthy dose of cynicism and profound warmth. To be in his company was to laugh and to be touched by a vibrant, scintillating mind. With no John in the day, there is no day to look upon.