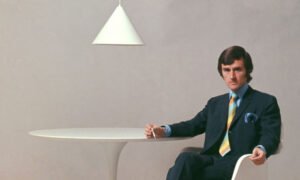 Raymond Hawkey, who has died aged 80, was one of the most innovative, influential and imitated graphic designers of the second half of the 20th century. As design director at the Daily Express in its prime in the late 1950s and early 60s, and later at the Observer until the mid-70s, with his introduction of banner headlines, using a simple photographic line technique and sans serif fonts, he not only revolutionised the look of newspapers but also changed the course of the visual culture in Britain.
In 1962, while at the Daily Express, Hawkey was asked by the writer Len Deighton, an old friend from Royal College of Art days, to design the cover for The Ipcress File, his first thriller about Harry Palmer, working-class antihero – who was still unnamed. The book’s publishers, Hodder & Stoughton, were appalled when they saw Hawkey’s Ipcress design – a photograph of a Smith & Wesson revolver, bullets, a cracked War Office canteen teacup and a stubbed-out cigarette. They refused to pay him more than 15 of his 50-guinea fee for his “disgusting” illustration. Deighton made up the rest. Shot with a technique known as “high-key”, the cover would later be regarded as one of the key moments in design history.
The book became a huge success, and Hawkey went on to create some of Deighton’s most memorable covers, including Horse Under Water (1963), Funeral in Berlin (1964) and Close-Up (1972, about a fading Hollywood star). Hawkey spotted Deighton’s scribbled recipes in his kitchen, “tidied them up, advised me about the graphics and took them to the Observer,” Deighton recalled. They became a popular “cookstrip” feature for many years; and for Hawkey’s cover of Deighton’s The Action Cookbook (1964), the Ipcress revolver reappeared with a sprig of parsley in the barrel. He later designed covers for Kingsley Amis, Frederick Forsyth and others.
His cover for the 1963 Pan paperback edition of Ian Fleming’s Thunderball – with bullet holes cut into the Brian Duffy photograph of a girl’s back – anticipated a phenomenon in which movies became a key element in the marketing and success of the Bond books. Not only did Hawkey decide that “James Bond” should be emblazoned across the top of every cover but also made the type twice the size of the title and Fleming’s name. It remained that way for almost four decades.
Born in Plymouth, Devon, Hawkey was an only child; his father was a commercial traveller who wanted his son to be an accountant. At 11, he won a scholarship to the city’s grammar school and developed a natural gift for drawing; at 16, he joined the Plymouth School of Art. In 1950, he won a scholarship to the Royal College of Art in London, to study illustration. After a year, he switched to the graphics course and became an assistant director on the RCA magazine ARK, supplementing his small grant with illustration commissions from the Central Office of Information, and shifts for the picture department at the now-defunct Sunday Graphic.
While still at the RCA, he won a Vogue design competition; offered a job at Condé Nast, he quickly made his mark as an art director. Following a brief period with the ad agency Colman Prentis and Varley, he joined the Daily Express. Later, in 1986, he was consultant designer at the launch of the Independent newspaper.
Because he was naturally shy, Hawkey was often considered difficult to know. “Ray had a way of diverting questions about himself, often turning the conversation back on to you,” says Edward Milward-Oliver, a friend for several years. In fact, he was the best company amid small groups of friends.
Always impeccably dressed – he didn’t own jeans or trainers – he took no exercise, except for a rare walk on the beach in his beloved Cornwall, where he had spent his childhood. His 18th-floor apartment in Notting Hill, west London, reflected his interest in the sea, with paintings and photographs of tall ships, Victorian figureheads and a ship’s brass compass (contrasting with a small Eero Saarinen tulip dining table and chairs from the late 1950s).
But in spite of his gentle voice and manner, once engaged in an assignment he was indefatigable, working 16 hours at a stretch, before sleeping briefly and putting in another 16-hour day in the flat where he lived for five decades. He was wonderfully generous, especially with his time, to young people who sought his advice, whether it was on design or writing – he wrote four very fine thrillers, including It (1983), regarded by many as the first truly modern ghost story.
A fastidious and private man, he had a dread of dying in hospital; and after a long illness he died in his own bed – with his beloved wife, Mary, reading his favourite poem to him.