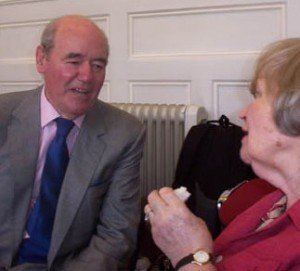 Brian Nicholson, who has died aged 85, was a veteran Fleet Street newspaper manager in an era of constant strife between print unions and proprietors, and an influential figure in the world of advertising.

Nicholson’s first senior appointment was as managing director of the Evening Standard, under Beaverbrook ownership, in 1972. He was credited by one historian with “massive improvements” to the paper’s finances – but resigned in 1977, allegedly because he could no longer stand the ill-temper of his boss Jocelyn Stevens, whose irascibility earned him the nickname “Piranha Teeth”.

Nicholson moved on to be joint managing director of the Observer, then owned by the US oil company Atlantic Richfield – which threatened closure when attempts to reduce manning levels provoked repeated strikes by members of the National Graphical Association, the printworkers’ union.

For several years Nicholson was in the front line of hostile negotiations with the NGA and other unions, which resisted technological progress and shunned his plea that “we must employ a reasonable number of people at a reasonable wage”.

It was an arena in which Nicholson’s natural warmth and wit were of little avail. As he later told an interviewer: “When I think of the crazily disproportionate time I’ve spent in union meetings over the past 20 years, it sometimes makes me want to cry.”

He remained in post when Atlantic Richfield – disheartened by the paper’s mounting losses – sold to the Lonrho tycoon Tiny Rowland in 1981. But Nicholson departed after much management and editorial turmoil in 1984 to acquire a wide portfolio of new roles. These included becoming a director and shareholder of News (UK), the vehicle through which the entrepreneur Eddie Shah – victor of a high-profile battle against the NGA in his provincial “free-sheet” newspaper group – launched Today as a national tabloid that aimed to use new technology, including colour printing, without union interference.

“Here was Eddie, with such vitality and drive,” Nicholson recalled. “I never doubted for a moment it could work and I wanted to do everything I could to help.” But the venture rapidly ran out of cash, and Today was sold to Rowland within ten weeks of its first issue, later to be sold on to Rupert Murdoch.

Nicholson was by now an elder statesman of Fleet Street (he was also a long-serving churchwarden at St Bride’s, the newpapermen’s church) with many cultural and charitable interests. In 1989 he became chairman of the Advertising Standards Board of Finance — the parent body of the Advertising Standards Authority and the collector of a levy on advertising costs which funds the industry’s self-regulatory system. This was very much a behind-the-scenes role, holding powerful interests at bay; on his retirement in 1999 he was praised by ASA chairman Lord Rodgers of Quarry Bank for his “vast knowledge of the industry and sensitive understanding that any attempt to lean on… the Authority could undermine the credibility of self-regulation.”

Brian Thomas Graves Nicholson was born on June 27 1930. He father Ivor was a well-known London journalist turned publisher, and his paternal grandfather Thomas was congregational minister of the Paddington Chapel.

Brian was educated at Charterhouse and began his working life as a reporter on the Newcastle Evening Chronicle. After a stint on Canadian papers, he returned to work on the Manchester Evening Chronicle, moving to Fleet Street to join the Sunday Graphic in 1956.

Thereafter he transferred to the advertising side of the business, first with the Sunday Times and from 1967 with the Beaverbrook group. He became chairman of the Audit Board of Circulation and a council member (and later a trustee) of the Commonwealth Press Union. From 1985 he chaired a headhunting firm, Marler International, and was a director of numerous media businesses; and from 1990 to 1992 he took on the role of head of public affairs for Lloyd’s insurance market during a traumatic period of losses and scandal.

Brian Nicholson married, in 1959, Henrietta, daughter of the South African aviator Nevill Vintcent. She survives him with their two sons; a third son died in a skiing accident in 1990.