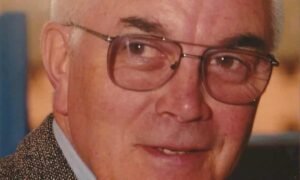 My friend Mike Nally, who has died aged 83, made his name in journalism in the 1960s as a reporter for Granada Television’s Scene at 6.30 news programme and then for the BBC’s Look North. Later he was news editor at Radio Newcastle before returning to his print roots with the Observer, initially in London and then in Manchester as the paper’s northern correspondent until the late 90s.
Mike was born in Crumpsall, Manchester, to Hilda (nee Clarkson), a civil servant, and her husband, Will Nally, a journalist and Labour MP for Bilston in the West Midlands from 1945 to 1955. Mike attended North Manchester grammar school for boys before going on to study politics at Manchester University.
His first job as a reporter was with the Stretford Journal, and he further honed his reporting skills on the Manchester Evening Chronicle, before moving to Granada.
A man of the left with a distrust of the establishment and its institutions, Mike had an inquisitorial style of questioning that was rare in the media world of the 60s. On one occasion, in an encounter on the BBC Northwards slot, he reduced the corrupt politician T Dan Smith – at the time supremely confident in his command of the media and recently named the Architect Journal’s Man of the Year – to utter silence.
However, Mike’s direct style of interviewing caused problems at the BBC and, after clashes with executives, he left Look North in 1970 to become news editor at Radio Newcastle, at the time one of the BBC’s more adventurous local radio stations.
In 1973 he moved back into print journalism with the Observer in Manchester, from where he provided insights into regional industry and politics, as well as delightful cameo articles of north country life.
In 1996 Mike moved into teaching journalism at the University of Central Lancashire in Preston, inspiring dozens of aspiring young journalists and bringing to that task – until retirement in 1996 – the same restless irreverence that had characterised his earlier work. In a typical moment teaching about public relations officers, he said: “My first reaction to a press release is: ‘what are the bastards trying to hide from me?’”
He is survived by his wife, Brenda (nee Taylor), whom he married in 1963, their sons, Sean and Joel, and grandchildren Maya, Orla and Otis.