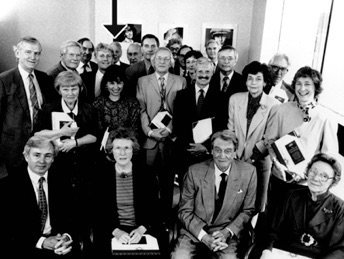 Everyone who knew him (and a fair few who didn’t – he inspired that sort of vicarious familiarity – had a favourite anecdote about Edward Mace who was travel editor of the Observer from 1973 to 1986. None were as funny or told more engagingly than his own. One of his favourites recalled an after office drinking session with colleagues at The Cockpit, the Observer local, during which the excitable leader page editor assured him that he had always regarded Edward as one of the best second rate brains on the paper. For someone who claimed he had never been to school, this was praise.

Edward’s provenance, including his exact age, education, career and general movements before he joined the Observer as PA to the Managing editor in 1959 were subjects that he preferred to leave vague. If he was aware of office rumours that he was in fact an illegitimate son of the ninth Duke of Devonshire – the Mace family home in Great Longstone Derbyshire was four miles from Chatsworth) he did nothing to discourage them. He certainly moved in grand circles and could be a dreadful snob. You forgave him because he was so stylish, and terrific company. He always made you laugh.

His sexual status was another grey area, he never married, but he had an unerring nose for rich, feisty, often titled, older women. He regularly escorted Miriam Sacher (daughter of Harry Marks co-founder of M and S) to her box at the Royal Opera House. He spent holidays in St Barts and Manhattan with Jeanie Erdman listed in the Guinness Book of records as recipient of the largest alimony settlement in American history. He was Princess Michael of Hess’s walker when she stayed at Buckingham Palace and usually accompanied her home to Schloss Wolfsgarten, a gloomy Gormengast lookalike the size of an Oxford College. Edward’s best stories, he was a wonderful raconteur, were about the dotty, often dodgy, aristos he met at Friday-to-Monday house parties in stately homes.

Edward rigorously adhered to the Mitford language code. No cars or mirrors please, only motors and looking glasses which may explain why he never managed to pass his driving test until he was forty. Dinner party guests listened spellbound to his accounts of the ancient laird he met at breakfast in some ancestral pile who showed him the miniature pistol he had invented for shooting wasps and an even tinier pair of gold scissors for cutting first class railway tickets (the small green cardboard kind they issued in the fifties) in half. Neatly. Then there was the one about returning to London from Vaynol, home of Sir Michael Duff Lord Lieutenant of Caernarvon, Edward got a lift on the Royal train with the Queen Mother who told jokes and drank large gins and tonic with her ladies in waiting throughout the journey. At Euston she tottered on to the red carpet where an official receiving party was lined-up, threw her arms round the station master’s neck and burbled ‘How perfectly sweet of you to come, but you really shouldn’t have bothered.’

Not all his jokes featured toffs. My favourite was the one about Edward taking his aunt to buy a hat at Marshall and Snellgrove. ‘How come this one smothered with flowers costs only £14 99p?’ queried his aunt, ‘Whereas the one with a single rose costs £25 99p.’ ‘Modom is paying for the restraint,’ replied the assistant.

Edward’s elegant, urbane style of writing was very different from his predecessor’s. Eric Newby, uber macho author of the classic ‘A Short  Walk In The Hindu Kussh’, had to be a hard act to follow. Edward did his share of Death Valley safaris and back-packing through the Amazon rain forest (his tent mate, a banker from Primrose Hill went berserk, attacked a monkey and had to be helicoptered out but his ideal break was to motor leisurely through the Italian lake district, preferably in a chum’s Rolls Royce. ‘The Italian lakes, he wrote, ‘are the cornerstones of pleasure.

They grow on you, trivial and frivolous, all beauty, a conspiracy to delight.’ He loved the extravagance of the Renaissance palaces overlooking Maggiore and the magnificent ornamental gardens of Villa Taranto at Pallanza. But a market stall displaying huge old fashioned ladies corsets whose intricate mechanism of straps and pulleys to operate the suspenders might have given St Paul himself, ideas, delighted him just as much.

He eavesdropped shamelessly. On a Greek island cruise after a visit to Rhodes he heard a voice say, ‘Aren’t you Sir Evelyn’s daughter? Well, there’s something wrong somewhere. I was here before the war and I told your mother then that Rhodes was a hot bed of fifth columnists. ‘If there’s a war,’ I said, ‘tell your husband the place must be bombed. Well, I’ve just come on board and it looks in perfectly good order to me. Clearly your mother never passed on the message.’

Edward had more than his fair share of loyal friends. He was kind, he was generous but most of all he was fun. He will be hugely missed.