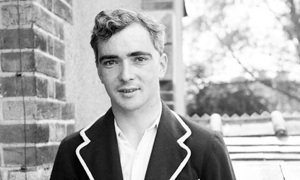 Vic Marks recalls his meetings with Tony Pawson, a self-effacing sportsman who was as modest about his many talents as he was hardworking as the Observer’s cricket correspondent

Tony Pawson, who died on Friday at the age of 91, was a brilliant amateur sportsman and the gentlest of human beings.

Pawson was very well qualified to do both jobs. He played 69 first-class games for Oxford University and Kent, and was the most fleet-footed of batsmen. He hit seven first-class hundreds and could boast a very healthy career average of 37, though Pawson never boasted about anything.

In many ways, he epitomised the old-style English amateur sportsman, except that there was not a trace of arrogance in him. “My fortune in cricket was to play when the first-class game was free and fast-flowing and with a county as concerned to play attractive and sporting cricket as to win,” he wrote in his 1980 autobiography, Runs and Catches. His last game for Kent was in 1953. At Canterbury, they still talk about the harum-scarum joy of Pawson and Godfrey Evans running between the wickets.

Pawson also represented England at football in the 1948 Olympics and played two games for Charlton Athletic. But he was probably an even better fisherman than cricketer or footballer. In 1982, he was a member of the English fly fishing team that won the World Championship, and he was subsequently awarded an OBE for his services to angling.

He was the most generous and mild-mannered of men, unfailingly polite and self-effacing. We would meet at Observer Christmas parties and he would talk about cricket as if he had barely played the game and was not sure what was going on.

But he did know, and by all accounts was rather more malleable and eager to help out than some of his successors in the cricket correspondent business.

When I first joined the Observer, I heard tales of Pawson’s readiness to satisfy the demands of those on the sports desk, especially when the football and cricket seasons coincided in September. They went along the lines of, “Tony, Yorkshire are playing at Headingley next week and there is an evening kick-off at Sunderland later that day. I don’t suppose you could cover both matches, by any chance?”

“Oh, that will be absolutely fine,” would be the reply.