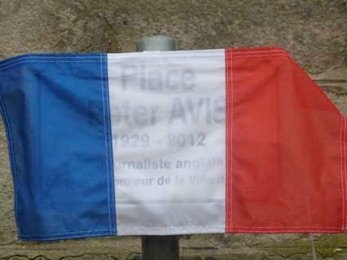 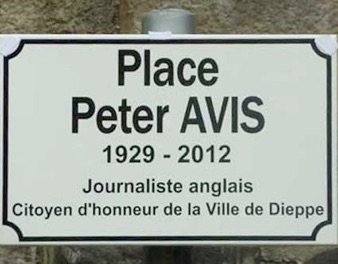 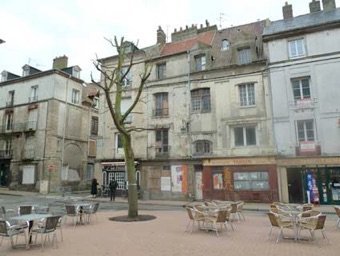 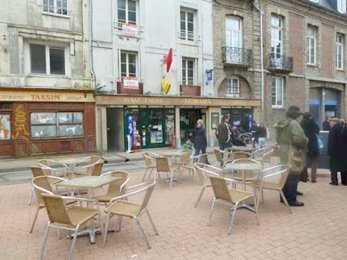 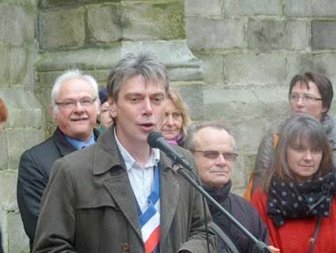 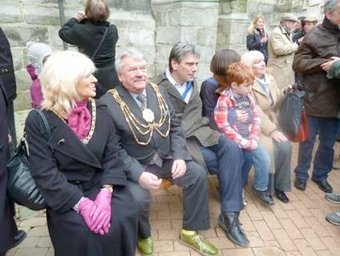 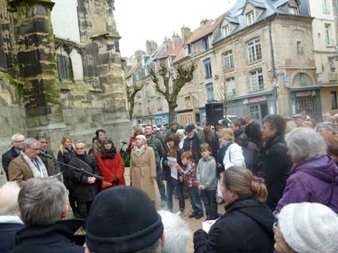 In front of the 16th-17th century St Rémy church 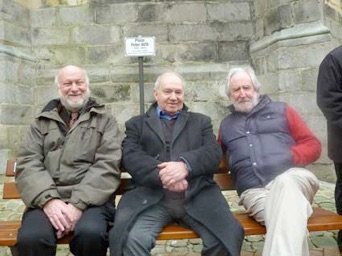 The drunkards Ian, Ron and Tony upon said bench! 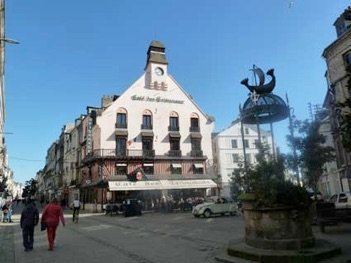 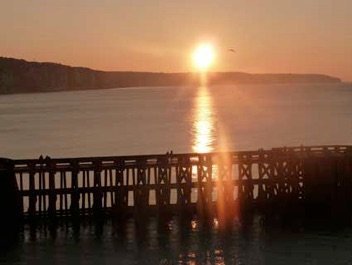 A fitting farewell as the ferry leaves the harbour

IT’S HARD TO THINK OF A BETTER LEGACY for a journalist than to have an attractive square in a French town square named after oneself, especially when accompanied by a bench facing one’s favourite bar.

Yet that is what has happened to Peter Avis, former subeditor at The Observer, who died in mid-December, age 83.

The authorities in his beloved Dieppe had agreed that Peter should have a bench facing the bar Le Brazza de Potinère in the centre of the old town. But when a group of former colleagues from The Observer  joined other friends and his family on 16 February for an unveiling ceremony in Dieppe they found that the local council had gone one better.

Behind the bench stood a newly-erected sign.  A largish crowd applauded as Dieppe’s mayor, M Sébastien Jumel, tugged on a small rope attached to a  tricolor to reveal  the sign bearing the words in French:  “Peter Avis Square.  English journalist  1929-2012. Honoured citizen of the town of Dieppe.”

Dieppe has been run by the Left for decades, and M Jumel, the French Communist Party’s “star coco”, according to the local paper, Paris Normandie (translation suggestions, please. Matey, blokish star?) made the first speech, praising Peter’s years of devotion to Dieppe.

Brighton’s Green Party mayor, William Randall (“Beel”  to the French comrades), who wore  a conventional dark suit, gold chain of office and  shoes of an appropriately greenish hue, also spoke in Peter’s honour. So did Hugues Falaise, the Socialist deputy mayor in the ruling Union of the Left grouping.

Peter’s daughter,  Siobhan, then told the crowd that when the family had first suggested a bench the Dieppe authorities had demurred on the grounds that  it would encourage drunkards. But when told that Peter had quite liked drunkards and had once befriended one, they relented and within two days  the bench was in position. She added that she and her family intended to continue visits to Dieppe, and sit on the bench as much as possible, so depriving  drunkards of the opportunity to do so.

Then followed drinks  and Peter’s favourite fresh crevettes from local fishing boats at the Maison de Jeunesse, where a large colour photo of Peter’s ever-youthful features looked down.

The bench  has a plaque with the words “In memory of Peter Avis”  in English attached to it.  Le Brazza’s  tables and chairs where local people can relax are dotted around the square.

Immediately behind  is  the 16th-17th century St Rémy church, one of Dieppe’s two principal old churches, now disused and badly in need of a facelift.  A few steps away against the church wall is a sombre reminder of a far less congenial raid on Dieppe.  A small monument tells that two soldiers of the Canadian Army fell there  in 1942 during the notorious failed attempt by the Allies to test the German defences of Dieppe, which resulted in huge losses.

That the naming of a square in his honour would provide one final surprise involving Peter should really have come as no surprise. Peter had a vast hinterland that came as a revelation to most of his colleagues at The Observer only on his death. That he was a francophile was generally known, as was the fact that he had been diplomatic correspondent of The Morning Star and the London correspondent of the formerly Communist French newspaper, L’Humanité. But the richness of his life in Brighton, where he lived, and in Dieppe, where he had a flat, were unknown to most.

Peter had fallen in love with Dieppe 46 years earlier when, on a visit to Paris, he had disembarked there, gone for a walk on the white cliffs, and been so enchanted that he decided to go no further. Over the years he developed a close relationship with the Dieppe local council, broken only by one interlude in the early 2000s when the Gaullists captured the town and Peter switched his allegiance to the nearby Communist-run fishing port of  Le Tréport. For years he produced A Taste of Dieppe, a highly informative and entertaining annual guide to Dieppe. He travelled frequently to his flat there on the Newhaven-Dieppe ferry, and was a leading proponent in the successful struggle to save it. He organised annual visits to Dieppe from Brighton, was an active supporter of the Brighton Festival and a university lecturer. He became a roving ambassador for Dieppe, and was made an honorary citizen as “the most Dieppois of Britons”. Then there are the three wives, Czechoslovak, Irish and Polish. Two of these, Liz, his second wife and mother of Sean and Siobhan, and Elzbieta, were present.

The Observer contingent consisted of Tony and Julie Mullins, Mark Seacombe, Ron Gillings and Ian Mather. There were also six journalists from the National Union of Journalists Paris branch, of which Peter was a keen member, and which we were surprised to learn still has over 300 members.

Paris Normandie devoted almost an entire page to the “Place Peter Avis” story with an article and tributes from local dignitaries, dwarfing the story advertised on the newsagents’ bill boards, which proclaimed the opening of a second Mcdonalds in Dieppe.

The following morning, even before the British contingent had departed, there was evidence that Peter’s legacy had already been sat upon, perhaps by one of Mcdonalds’ customers. Drops of tomato ketchup were splattered on the ground beneath it.  Would Peter have approved? At least it was red.