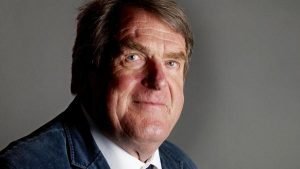 A characteristic talk by Jeremy Lewis would end with his looking up, blinking through his glasses and asking: “Was that . . . vaguely okay?” Playing the absent-minded professor, he would fumble through notes, glance at his watch and cry, “Oh God!” (on finding there was so much time still to go.) But he usually had riveting anecdotes to tell, so if he tried to finish with a modest “Well, I could go on, but I’m sure you’ve all had enough of me,” his listeners would call for more — even at the Highgate Literary and Scientific Institution, whose members are sticklers for a prompt conclusion to lectures.

Joining the publicity department of the publisher William Collins in the late 1960s, when the book trade was peopled by gents who took long lunches at their clubs, he inhabited the literary world for 50 years: on the staff of several London publishing houses, two literary agencies and three magazines. His book reviews would often begin nostalgically: “When I first started out in publishing . . .” or, “In the days of my youth . . .”

From the start, Lewis loved the social side of publishing, “the incestuous book trade gossip” and the launch parties, the pulling of corks among the corduroy jackets and bow ties and braying voices. Gradually Lewis turned into an amiable elder of the book business himself, resembling the tall, tweedy fellow in Nick Newman’s cartoon strip in Private Eye, Snipcock & Tweed — Snipcock being variously likened to Tom Rosenthal, George Weidenfeld or André Deutsch. As the editorial director of Chatto & Windus, Lewis was finally “hoofed out” (his words) in 1989, after the arrival of Carmen Callil.

Filled with a bold resolve, he embarked on a writing career, starting — oddly, for someone who had always appeared so self-effacing — with memoirs. Self-deprecation was his carapace for shyness and insecurity. Behind it was a perceptive observer and raconteur who peppered his reminiscences with vivid pen-portraits of his authors, and of the ebullient European émigrés — Weidenfeld, Deutsch, Paul Hamlyn and Ernest Hecht “with his melon-slice grin” — who had created publishing houses and made the book business more colourful.

His mother hoovered his baby hamsters, mistaking them for cornflakes
Jeremy Morley Lewis was born in 1942, the elder child of George Morley Lewis, a urologist, and his wife, Janet Iles. His mother was a long-limbed “life force”, the daughter of a Gloucestershire farmer who wore the fearsome demeanour of a dowager duchess and who once, quite unapologetically, hoovered up a litter of baby hamsters belonging to her son, having mistaken them for cornflakes. His father was a surgeon who had been a Cambridge rowing blue, and in the Second World War a medical officer with a Guards regiment. Lewis believed his father never recovered from the trauma of being present at the liberation of a concentration camp, and that it caused his withdrawal from his family and descent — after a brief attempt at emigrating to Canada — into reclusive, chain-smoking alcoholism.

In childhood Jeremy was “stupefied by boredom . . . rain drumming against the sash windows, or being taken for long walks in Battersea Park”. At Malvern College he invented a literary society, meeting in a subterranean boiler room, to avoid games, and especially the annual Ledbury run. His act of clumsy oafishness developed partly out of his failure to match his father in sporting or academic success. He also determined to be the opposite kind of parent: “I have deluged my daughters with affection and encouragement, and embarrassing emanations of paternal pride.” His elder daughter, Jemima, who is married to Henry Dimbleby, is a Telegraph columnist and consultant editor of The Week. Hattie is now a full-time mother.

As a publisher Lewis had effectively ghost-written books for the famous — the cricketer Imran Khan, for instance — producing lucid prose on subjects of which he knew little. He found writing biographies (of the literary critic Cyril Connolly, Graham Greene’s family, Allen Lane, the founder of Penguin Books, and David Astor of The Observer) much more engaging. For a start, it involved lunching. “Rocketing along with the Astor book, enjoying it no end” was a typical bulletin.

His first book, Playing For Time, began as articles for his friend Alan Ross’s London Magazine, about his undergraduate days at Trinity College Dublin, where he became mad about jazz and wrote for college magazines, editing two of them. He also fell in love — he was engaged briefly to the writer and journalist Suzanne Lowry — and was keen on playful pranks like jumping out of a wardrobe in lime-green pyjamas. Later, in London, he met a fellow TCD graduate, Petra Freston, known as Fox, whose messy flat he offered to clean up for her. Working with the literary agent Pat Kavanagh at Peters Fraser and Dunlop, “Fox” became the devoted mainstay of Lewis’s life, gently pointing out the exaggerations in his stories (“But there were not nine Japanese experts on Housman, there was just one”) and being the breadwinner when he left publishing, thus enabling him to carve out his new career. Their house — “near Richmond Park”, a disguise for East Sheen — was filled with friends from the literary world, offering long summer lunches in the garden, or winter solace in Mrs Lewis’s old-fashioned nursery dishes: junket, scones and rice pudding.

Once, on a family holiday in a Cornish village, Lewis called on the waspish nonagenarian Dr AL Rowse to discuss Cyril Connolly. “I know all about you, dear,” trilled Rowse, who was propped up in bed. “You’re a second-rater who read English at Oxford and thinks he knows all the answers.” “No I’m not,” said Lewis, “I’m a second-rater who read history at Trinity College Dublin, and I know next to nothing.” Charmed, Rowse later suggested that “Jeremiah”, as he called him, might take over his Shakespeare research. Lewis confessed that he loathed Shakespeare.

Biography, Lewis wrote, “attempts the resurrection of the dead, and what could be more miraculous than that?” Also, it took him into “that seductive, raffish world where society and bohemia intersect” and where preposterously snobbish behaviour thrived. Making books out of these stories made him familiar with family connections, which he found irresistible. Even a round-robin in January, announcing to friends that his secondary cancer was now untreatable, related that he had had a long talk with “my new best friend, Christopher Woodhouse, aka Lord Terrington, who is the son of CM ‘Monty’ Woodhouse, the son-in-law of Margaret Vyner, and the recently retired (and much admired) Prof of Urology at the Marsden”.

Throughout his career he was a hero-worshipper, with a special fascination for forgotten or fading literary heroes. He revered (and befriended) people endowed with qualities he felt he lacked: raffishness, style and sexual élan. Men such as Patrick Leigh Fermor and James Lees-Milne.

He was a fanatical cat-lover, from the first cats, Fellow and his wife, Doris, to the last, Monkey. At Chatto, during his fractious relationship with Carmen Callil, they at least shared a love of cats. When Fellow died of old age, Carmen insisted that he take the day off: “You need time to grieve.”

His motive in writing memoirs such as Grub Street Irregular was to celebrate a vanished world, and to “combine comicality with a sense of the sad absurdity of life”. Jovial, accident-prone and “neurotically apologetic”, he was no use in a crisis, “rushing about, lamenting loudly”. He hated disputes, and could not bear it if anyone took offence.

In print, he rarely put the boot in, but in conversation would often confide, about a famous author, “I so agree with you about X. Quite unreadable.” He scorned over-reverential literary lives and “swooning recollections of the 1960s”. Cleverer than he ever let on, he remained ambivalent about “ephemeral” biography, and found biographers generally prone to “preening and mutual regard”.

While working on Cyril Connolly’s life he befriended two of Connolly’s three wives. The second, the pantherine femme fatale Barbara Skelton (who numbered King Farouk, Feliks Topolski and Ken Tynan among her lovers) immediately discerned that the “silly ass” would make a bosh of opening a champagne bottle. Yet he once agreed to drive her from France to London, despite his terror of driving, “hunched over the wheel and white with fear” in his daughter’s words; and Skelton made him her literary executor. In his friend and protégée Sara Wheeler’s Terra Incognita, he appeared as “an affable buffoon sitting at home in the suburbs”; while Anthony Powell likened him to a floppy labrador and others referred to his “tail-wagging”.

His last two office jobs were perfect for him: editor-at-large for the Literary Review, and contributing editor at The Oldie. In 1996 Richard Ingrams, the founding editor of The Oldie, took him to a greasy spoon and asked him to come in two days a week to be a factotum, proof-reading and discovering unknown writers among readers. After the acrimonious split in 2014 between Ingrams and The Oldie’s owner, Lewis stepped in to guest-edit during the brief interregnum.

The ensuing froideur with Ingrams soon healed. Lewis had never aspired to be editor, and carried on helping out, contributing a column originated by Auberon Waugh, basically about the imbecility of modern life, or about his own hopeless failings, such as “fear and loathing” of the telephone. The arrival of email was a lucky day for him, and to the end he was sending back proofs, finding gems in the slush pile and, invincibly cheerful, compiling his tenth book. “Most of it is in my head, so I must get down to it.”